Skip to content
These questions are connected to the message, “The Way of Love,” from Dec. 5, 2021.
Background: One of the most famous of Roman roads was called the Apian Way. Many events took place on this road but perhaps it is most famous for its role in the slave revolt lead by Spartacus in 73 B.C. After the Roman army subdued the insurrection they crucified more than 6000 slaves and lined the Appian Way for 130 miles with their bodies. The memory of this event would have been baked into the lore of Israel, and kept alive by retellings handed down from generation to generation. 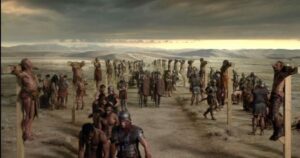 Dive In: Imagine this is part of your history — conceivably a grandparent was alive at the time (much like how WW I & II stories are passed along in families today). Now read this passage slowly, a couple of times, in an unfamiliar translation of the Bible (e.g. N. T. Wright’s The New Testament for Everyone, Contemporary English Version, Amplified Bible, or The Message) with this story and image in your mind. What must it have been like for the disciples to hear these words?
Reflect:
Digging Deeper:
Verse 27 is a well debated verse among scholars with many suggestions posited for its meaning. Here are some of them:
Act on it:
What is something from this passage or sermon that you can act on this week — a practice or experiment to help you live it out? Perhaps share it with the group and purpose to share your experiences with the practice or experiment.
Scroll to Top